Homes for Sale in Winooski, Vermont

Winooski has the unique geographic feature of being a one-mile square block north of the Winooski River. With a population of nearly 8,000, Winooski offers a small-town feel yet has easy access to the rest of the Burlington area and all it has to offer.

Search all homes for sale in Essex, VT. Contact the Brian Boardman Group for more information about Winooski or questions about Winooski real estate.

Get Ahead - Register to keep track of your favorite listings and email updates when similar properties hit the market.

Settled in 1722 by Ira Allen (later founder of the University of Vermont), Winooski became an important revolutionary location just north of Burlington. Ira established a dam across the upper falls of the Winooski River and proceeded to build sawmills on the banks of the swiftly flowing river once called the "Onion River". The plan proved effective enough that the American Woolen Company built brick mills on the river. Employment opportunities attracted thousands of workers from the surrounding regions. Because of this inflow, Winooski had a very strong cultural influence.

This inflow of workers, along with the economic vitality the mills provided, evaporated with the closing of the woolen mills in 1954. Sadly, the community saw a decline the next 25 years until, in 1981, all three-mill buildings sprang to life again as they were converted into attractive residential condominiums, retail shops, restaurants, and business offices.

In 1999, the city began a public process to engage in a major redevelopment of the city center. The extensive public dialogue resulted in a plan that garnered $38 million in public funding and $169 million in private investment. Construction began in 2004. Two years later, Winooski won a national award for smart growth from the EPA. It has also been recognized as a Preserve America Community by the Advisory Council on Historic Preservation.

Higher education opportunities abound with the close proximity to Champlain College, Community College of Vermont, the University of Vermont, and Saint Michael’s College.

No matter where you are in Winooski, just walk a couple of blocks and you’ll find a quiet spot to visit. Featuring at least a dozen open community spaces, parks, and community gardens, there is something for everyone -- from small greens to large facilities that have pools, ice rinks, tennis courts, and ball fields.

Newly constructed custom-built Contemporary style home located on a quaint dead-end street in the heart of Winooski! Enter off the covered front porch into an open living room with 9 ft ceilings, cozy gas fireplace & large windows that extend into a beautiful dining area & kitchen featuring granite counter tops, stainless steel appliances, plenty of cabinets & a breakfast bar. Off the kitchen is a 1/2 bath with tile flooring & entrance to the garage, basement & access to the large back deck. The impressive stairway leading to the second floor offers vaulted ceilings & multiple windows offering oodles of natural light & provide an elegant feel. The home features high quality fixtures & finishes & has 3 spacious bedrooms with 2.5 baths which includes a primary bedroom with a beautiful en-suite bath with custom tiled shower, large walk-in closet & seasonal views of the Adirondacks with wonderful sunsets. Additional features include 2nd floor laundry, an open backyard, a fully insulated one car garage with 10 ft ceilings and electric car charger, fully insulated basement with egress window that could easily be finished & a Bosch on demand heat & hot water system. Ready for solar. Take a quick stroll to beautiful Landry Park & Myers Memorial Pool to enjoy some recreation. Or head to downtown Winooski or to Burlington & dine at one of the many fine restaurants. The home is situated with easy access to all area schools, UVM Medical Center, I-89, grocery & so much more!

A Fantastic and Affordable Investment Opportunity - This spacious property is located in an excellent city location, set amid well-kept homes on a nice quiet street and conveniently located just a short walk (2 blocks away), from Winooski's lively & vibrant city center. Minutes to downtown Burlington, UVM, I-89 and other nearby amenities. With some TLC updating, this would be a great home for owner occupancy while generating rental income from the apartment. This was originally a Single Family Home. The apartment was added years later. The town listers record as a 2-family dwelling. (Also listed as a Multi-Family MLS#4939822)

A Fantastic and Affordable Investment Opportunity - This spacious property is located in an excellent city location, set amid well-kept homes on a nice quiet street and conveniently located just a short walk (only 2 blocks away), from Winooski's lively & vibrant city center. Minutes to downtown Burlington, UVM, I-89 and other nearby amenities. With some TLC updating, this would be a great home for owner occupancy while generating rental income from the apartment. This was originally a Single Family Home. The apartment was added years later. The town listers record as a 2-family dwelling. (Also listed under Residential listings MLS#4939821) 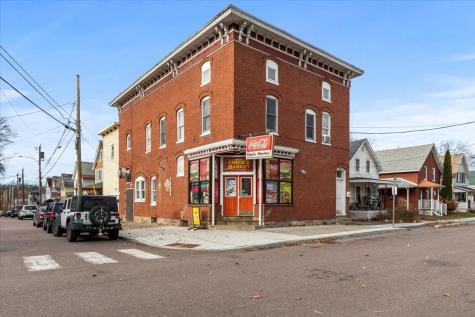 More than a neighborhood market, this property is a piece of Winooski history. Started in the 1940's, Chick's Market has been a community hub in Winooski for many people. Own your slice of Winooski with this market and two 2 bedroom rental units. The first floor market is equipped with a full kitchen perfect for a deli or takeout. Built in coolers line the walls as well as a large storage area for goods. Bathroom located towards the back of the store. The possibilities are endless for this space in a prime Winooski location! Basement floor has a full bath and kitchen with laminate floors. Second floor houses the first of two 2 bedroom apartments. Light filled with many windows, this apartment has laminate floors and an open living and kitchen area. Full bathroom and laundry hook up are also within the unit. Second 2 bedroom full bathroom apartment has a unique wood paneled ceiling with skylights. Open floor plan with large eat in kitchen and laminate floors. Full bathroom, laundry hook ups available as well as a separate entrance into the apartment. Attached driveway located next to the building for parking. Building is positioned in the heart of Winooski, central to restaurants, shopping and the Winooski River. Minutes to Burlington, colleges and I89, super walkable and convenient location. Great investment opportunity and chance to own a piece of history!

Copyright 2023 New England Real Estate Network, Inc. All rights reserved. This display of listings may or may not be the entire Compilation from the NEREN database, and NEREN does not guarantee the accuracy of such information. The information being provided is for consumers' personal, non-commercial use and may not be used for any purpose other than to identify prospective properties consumers may be interested in purchasing. Data last updated February 8, 2023 11:54 AM EST.