Learn more about Lake Champlain and Vermont history below. Visit more on the local information page. If you have other questions about history in Vermont or would like help with finding a home in the Greater Burlington VT area, contact the Brian Boardman Group. You might also like to view our listings or start your own home search.

In 1609, Samuel de Champlain, a French explorer, heard Indian tales of an idyllic lake with shores populated by wild animals and felt compelled to mount an expedition. He and his party made their way to the southern end of the lake where he joined the people of his Algonquin guides and was subsequently caught up in their battles against the Iroquois. Because of Champlain's involvement in the fighting, the Iroquois became the enemy of the French.

The critical and strategic importance of Lake Champlain was soon evident to the European powers. For the next century, the 128-mile-long lake and its shores were the scene of many battles, some which became turning points in world history. Two men, Ira, and Ethan Allen settled over 300,000 acres, building mills along the Winooski River. Some of the land they purchased came from a man named Edward Burling and the largest city on the northern part of Lake Champlain was named after him. Ira later founded the University of Vermont.

Over the coming years, settlers spread throughout the land. Many were forced to leave their farms to participate in the Revolutionary War. In 1776, Benedict Arnold created the U.S. Navy by launching a fleet of ships at the southern end of Lake Champlain. They engaged in their first battle against the British near Valcour Island. Because of Arnold and his ships, the British were delayed long enough to allow George Washington to build his army to the south. Some historians believe that if Benedict Arnold had been killed during his heroic battles with the British he would be known today as one of the greatest heroes of the war.

At that time, the easiest way to access the northern area of Vermont was by steamboat. One of the very first steamboats in the nation, The Vermont, an elegant wood-burning steamer, was launched from the beach in Burlington. This helped bring in an era of invention as more steamers were built and public travel to Burlington increased. 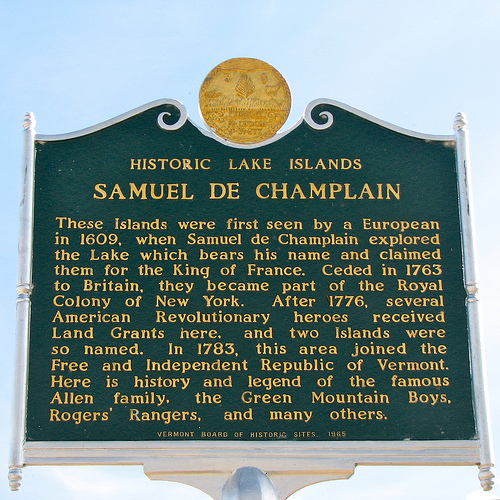 Today, the Lake Champlain Transportation Company continues to ferry cars and passengers across the lake at 3 separate crossings, making it the oldest steamship company in operation in the United States.

Burlington became a center of northern trade as most of the mountains of Vermont were stripped of their forests. The sawn timber was brought to Burlington to be milled and shipped out all over North America. By the 1850's, the population had grown. When the railroads finally made their way through the mountains, the vibrant steamboat trade slowed and the transportation focus switched to land travel.

The early part of the 20th century brought predicaments and prosperity. Many young people left the state to find work elsewhere. In the Burlington area, despite this population shift, the economy grew slowly but surely. The Great Depression caused hard times, but WWII created manufacturing jobs and prosperity grew. Manufacturing jobs then slipped away in the 1950's, depressing the local economy.

In the 1960's, Vermont began promoting itself aggressively through the efforts of many state and local organizations, and brought industry to the Green Mountain state. International Business Machines and General Dynamics came to the state and others followed.

Today, the civic discussion centers on how to maintain Vermont's rural quality and the superior quality of life that brought people to Burlington in the first place. Over the years, Burlington has established itself as a community with vision and the ability to follow turn vision into reality, whether turning Church Street into a successful outdoor mall or finding innovative ways to keep Lake Champlain clean and healthy. The overriding concern for Burlington's residents is to continue to ensure Vermont's unique character and beauty.

Visit more on the local information page. If you have other questions or would like help with finding a home in the Greater Burlington VT area, contact the Brian Boardman Group. You might also like to view our listings or start your own home search.

Learn more about Life in Vermont: